If your mind is closed and you are not able to consider new theories,
it would be best for you to leave immediately,
because if you stay,
you may become very uncomfortable.

However, if your mind is Open and you Thirst for new ideas,
it may be in your best interest to stay,
for an exciting Discovery is about to be revealed to you.

Discover the secrets of the movie:
National Treasure.

Soon to be released book:
The True and Mathematical Relationships

This website will demonstrate several incredible and some very surprising
"coincidences"
which are contained in the nearly 400 year old collection of poems written by "William Shakespeare".

Light-of-Truth.com will not attempt to convince you that the ciphers presented on this site
were part of an intricate and deliberate design by William Shakespeare.
Light-of-Truth.com will merely show them to you from that perspective.
In fact, you are encouraged to make your own interpretations of the numbers that will be shown to you. Any "rational Human-being" would certainly dismiss the following examples as pure coincidence.

For the purpose of demonstrating these cipher coincidences,
Light-of-Truth.com will present one "possible" theory.

The theory you will see is uniquely original and exclusively presented by Light-of-Truth.com,
but may one day be widely Known as the only accepted Truth about these Sonnets.

The solution to the Sonnets Dedication Poem cipher
reveals an interesting design with great Rosicrucian significance.

FRom fairest creatures we desire increase,
That thereby beauties Rose might neuer die,

(For a clean printable Adobe PDF version of the Keys, click here.)

The first Key is a very basic Table containing the 26 letters of our alphabet on the left of the rows
and 15 columns of numbers which go up to 365 that correspond to those letters.

The second Key is using an Elizabethan 24 letter alphabet where the "J" is represented as an "I",
futhermore the "U" and "V" are used interchangeably.
The Table below shows the four sets of numbers we will use for each letter:
These ciphers are Known to Baconians as;
"Simple", "Reverse", "Short", and "Kaye" ciphers.

Now that we have these Two Tables of Keys out in the open,
you might ask, "What we should do with them?"

Light-of-Truth.com will now demonstrate to you a never before seen example
of how these two Keys work together in the Sonnets:

(Adding up the "Simple" ciphers of those letters we get the following totals.)

Which spells out the word: "KEY".

"Nil nisi clavis deest"
Where does this Key come from?
It is the theory presented by Light-of-Truth.com that these Tables were designed by John Dee.

John Dee (1527-1608)
Astrologer to Queen Elizabeth I
and an important 16th Century mathematician. 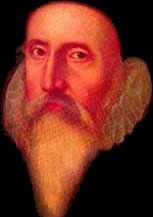 A wonderful example of how John Dee used the "Simple" and "Kaye" ciphers
is revealed when we add up the cipher numbers in the Title of his famous
esoteric book of 1564 called, "Monas Heiroglyphica".

John Dee has given us an example of how an author
may use these cipher methods to place a "signature" into their creations.

The combination of the Simple and Kaye Ciphers is a popular number cipher method
that was used in Elizabethan times by John Dee and others, including William Shakespeare.
The Reverse Cipher and Short Cipher are also used extensively throughout the works of the day,
and reveal many historic and little known facts about the times in which these Masters lived.

Do those lines sound like they are hinting at "Prospero"?

O, it is monstrous! monstrous!
Methought the billows spoke and told me of it;
The winds did sing it to me; and the thunder,
That deep and dreadful organ-pipe, pronounc'd
The name of Prosper: it did bass my trespass.

Is "Prospero" representative of John Dee?
It is commonly accepted that "Prospero" was based on Elizabeth's astrologer, "John Dee".
Surely the first 6 lines in Sonnet 14 are referring to Dee then.

The next line in the Sonnet is number 7:

07   Or say with Princes if it shall go well

Princes? What Princes?
What do the numbers tell us?
This is one of the mysteries that we will pursue in our study of the cipher
"coincidences".

"FRom fairest creatures we desire increase,"

Is this a possible "signature" for John Dee using the very first letter of the Sonnets?
Light-of-Truth.com suggests that Dee built the mathematical design of the Tables,
but why would he put so much work into something to just give them away to "Shakespeare?
What has Dee to do with Shakespeare anyway?
And what "Princes" does he say if it shall go well?

This website will reveal some of the more interesting places where this number system was used,
and will teach the Truth Seeker how to make their own discoveries.
This site will also supply a extensive map to an elaborate Labyrinth which contains many exciting,
but forgotten secret lessons and incredible surprises to those who take the time to search for them.
Light-of-Truth.com will open your eyes to the hidden and mystical world of Shakespeare's Sonnets,
and will give you enough experience to begin your own search,
but will not give up all the secrets so far discovered by this writer.
To do so would be to take away from you one of the most exciting adventures that a Truth Seeker may ever undertake.
I'd recommend that you pay close attention to the paths that this site will lead you on,
and that you keep a keen eye ready for possible clues that will be sparkling just beneath the surface,
even though not pointed out by Light-of-Truth.com.
In this way the "Light of Truth" may shine from the shadows and be a beacon
to lead you to a Higher Understanding of Shakespeare, the Universe, and yourself.

Below is a Table of Links to the 14 Tiers of the Pyramid, the 365 Days,
and the text of Shakespeare's Sonnets with their appropriate total Line numbers.
Set your screen resolution to 1024 x 768 or better for optimum viewing.
(Windows: Go to Control Panel, click on Display, then Settings, and change to 1024 x 768)